11/26/2014 Egypt (International Christian Concern) – Ernst Kamel and Eid Gendy were shot and left for dead while driving their tuk-tuk in the village of Muharraq Monastery in southern Egypt. Eid was killed instantly, but Ernst was able to survive the attack.

This is just one of the many acts of violence against Christians in Upper Egypt that continue despite the overthrow of the Muslim Brotherhood and the installation of a new government led by President Abdel Fattah al-Sisi.

Christians still face abduction, seizure of their properties, and oppression without any protection. Their appeals to the authorities are regularly met with indifference. Islamic gangs regularly target Christian communities, knowing that they will likely face no real prosecution.

It was about 8:30 pm on Wednesday, September 3, that Ernst Kamel and his cousin Eid had just picked up a passenger in their tuk-tuk, Tawfik Ayad. They were taking him towards his home, in the village of Muharraq Monastery, in Assiut Governorate (Upper Egypt), when they saw the two armed, masked men standing next to a motorcycle.

Ernst and Eid had pooled their money to buy the small taxi only two weeks earlier. “I had to sell our family’s only buffalo and Eid borrowed some of the money from relatives to purchase it,” Ernst told ICC. 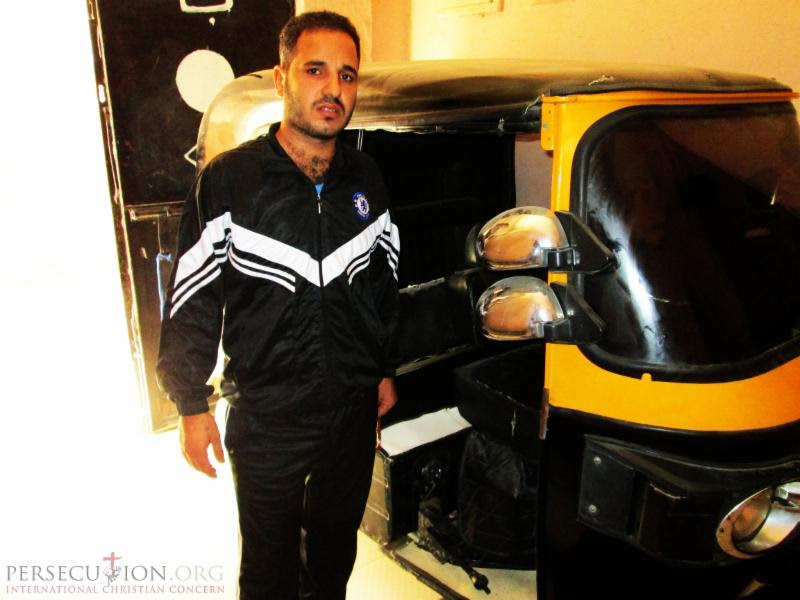 Ernst with the tuk-tuk he was driving during the attack

He had previously traveled to Libya to work as a construction worker but had returned in February as the security situation was too dangerous there. Economic opportunities are limited, so we decided to purchase a tuk-tuk, hoping it would produce a good income for our two families, Ernst continued.

“I was driving the tuk-tuk and Eid was sitting beside me. We were passing the cemetery near the entrance of the village when we saw the motorcycle and two masked gunmen waiting on it.”

“We were surprised as two masked men on a motorcycle, carrying weapons, came toward us,” Tawfik Ayad, the passenger during the attack, told ICC.

“They then demanded us to give them all the money we have and the tuk-tuk, threatening us with death,” Ernst continued, “but we didn’t give them anything.”

“They then shot into the air to scare us and make us leave them the tuk-tuk and escape, but we confronted them. They shot at Eid first, he was shot twice, once in his neck and the other in his belly. He died immediately. Then they shot at me. I was shot twice in my stomach,” Ernst recalled. “After they had considered that we died they fled immediately by their motorcycle.”

“I was able to get up and walk a few feet before some passersby stopped and called my brothers and they were able to get me to the hospital,” Ernst said.

Any Signs of Improvement?

Ernst is slowly recovering from his wounds. One of the bullets passed through his body, the other is still lodged inside, but doctors have decided to leave it there.

The healing process for Mariam, Eid’s wife, and the couple’s one-and-a-half-year-old son, and their grieving family will be a much longer process. 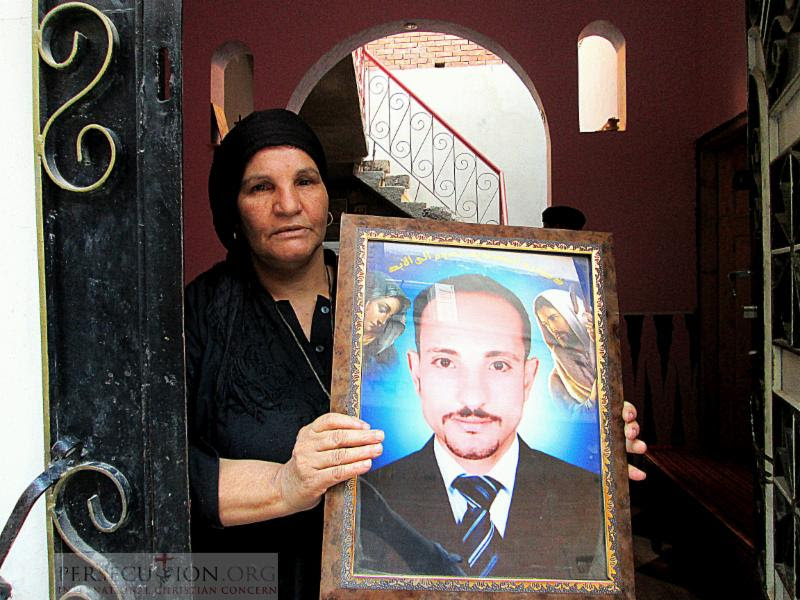 Eid’s Mother holding a picture of her slain son

Unfortunately, these types of attacks are not uncommon. Father Mossa Shaker, the priest of St Mary church, in nearby Quseyya told ICC, “just a few days after the incident of the shooting of the two Copts, some armed masked Muslim thugs stopped a pickup-truck owned by a Christian man loaded with mango fruit. They seized his pickup-truck and 500 Egyptian pounds from the owner.”

Father Mossa added, “The Christian residents of Muharraq Monastery village are living in a state of tyranny, bullying, and oppression by the Islamic gangs of three neighboring villages called Alaghima village, the Great Manshiyya village, and Khashba village without any intervention from the police to protect them.”

Ernst echoed the same theme as Father Mossa,”Also after our incident the security forces deployed across the village for four days. After they had left the village, the Islamic gangs came back to our village carrying the weapons, terrorizing the Christians, imposing extortion money on them amid a state of indifference and complicity by the police.”

Ernst added “Our incident wasn’t the first crime taking place in the village, but there are many incidents have been occurring daily by these criminals like imposing extortion money on them, kidnapping them for ransoms without any protection from the police.”

Ayman Hakim, a store owner in Muharraq Monastery village, told ICC “The situation is so bad for us here. We face bullying, gangs imposing royalties. Every day I lock my store early, before it is dark, fearing the attacks of the Islamic gangs on my store asking for extortion money.”

“Also, I cannot allow my children to go out in the street alone,” he continued. “They are staying at home, prevented from playing in the street because we are afraid they might be kidnapped. Life is unsafe here. Many of us receive threats from those gangs without any intervention from the security to protect us.”

Ongoing attacks against Christians, churches, and Christian properties are occurring almost daily in different places in Egypt, especially in Upper Egypt, and the new government is more focused on dealing with challenges to their own power than protecting the people and churches of a religious minority.

“I feel that there are no rights for us in this country,” Ernst concluded.
For interviews, contact Todd Daniels, Regional Manager for the Middle East:
RM-ME@persecution.org

# # #
You are free to disseminate this news story. We request that you reference International Christian Concern (ICC) and include our web address, www.persecution.org. ICC is a Washington D.C.-based human rights organization that exists to help persecuted Christians worldwide. ICC provides Awareness, Advocacy, and Assistance to the worldwide persecuted Church. For additional information or for an interview, contact ICC at 800-422-5441.