The definitions of the limits of this territory vary between passages in the Hebrew Bible, with specific mentions in 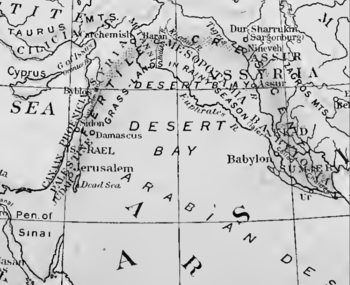 1916 map of the Fertile Crescent by James Henry Breasted. The names used for the land are “Canaan” “Judah” “Palestine” and “Israel” click image to enlarge

The Hebrew Bible provides three specific sets of borders for the “Promised Land”, each with a different purpose. Neither of the terms “Promised Land” (Ha’Aretz HaMuvtahat) or “Land of Israel” are used in these passages: (Genesis 15:13–21 ESV) , (Genesis 17:8 ESV) [21] and (Ezekiel 47:13–20 ESV); use the term “the land” (ha’aretz), as does (Deuteronomy 1:8 ESV) in which it is promised explicitly to “Abraham, Isaac and Jacob… and to their descendants after them,” whilst (Numbers 34:1–15 ESV) describes the “Land of Canaan” (Eretz Kna’an) which is allocated to nine and half of the twelve Israelite tribes after the Exodus. The expression “Land of Israel” is first used in a later book, (1 Samuel 13:19 ESV). It is defined in detail in the exilic Book of Ezekiel as a land where both the twelve tribes and the “strangers in (their) midst”, can claim inheritance.1)Rachel Havrelock, River Jordan: The Mythology of a Dividing Line,University of Chicago Press, 2011, p.21. The name “Israel” first appears in the Hebrew Bible as the name given by God to the patriarch Jacob (Genesis 32:28 ESV). Deriving from the name “Israel”, other designations that came to be associated with the Jewish people have included the “Children of Israel” or “Israelite”.

Biblical interpretations of the borders 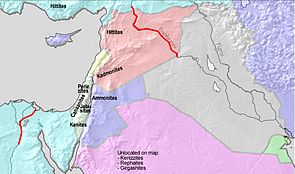 Note: Interpretations of the borders of the Promised Land, based on scriptural verses

(Genesis 15:18–21 ESV) describes what are known as “Borders of the Land” (Gevulot Ha-aretz),2)Kol Torah, vol. 13, no. 9, Torah Academy of Bergen County, 8 November 2003 which in Jewish tradition defines the extent of the land promised to the descendants of Abraham, through his son Isaac and grandson Jacob.3)See 6th and 7th portion commentaries by Rashi The passage describes the area as the land of the ten named ancient peoples then living there.

More precise geographical borders are given (Exodus 23:31 ESV) which describes borders as marked by the Red Sea (see debate below), the “Sea of the Philistines” i.e., the Mediterranean, and the “River”, the Euphrates), the traditional furthest extent of the Kingdom of David.4)Stuart, Douglas K., Exodus, B&H Publishing Group, 2006, p. 549 5)Tyndale Bible Dictionary, Walter A. Elwell, Philip Wesley Comfort, Tyndale House Publishers, Inc., 2001, p. 984

Genesis gives the border with Egypt as Nahar Mitzrayim – nahar in Hebrew denotes a large river, never a wadi. 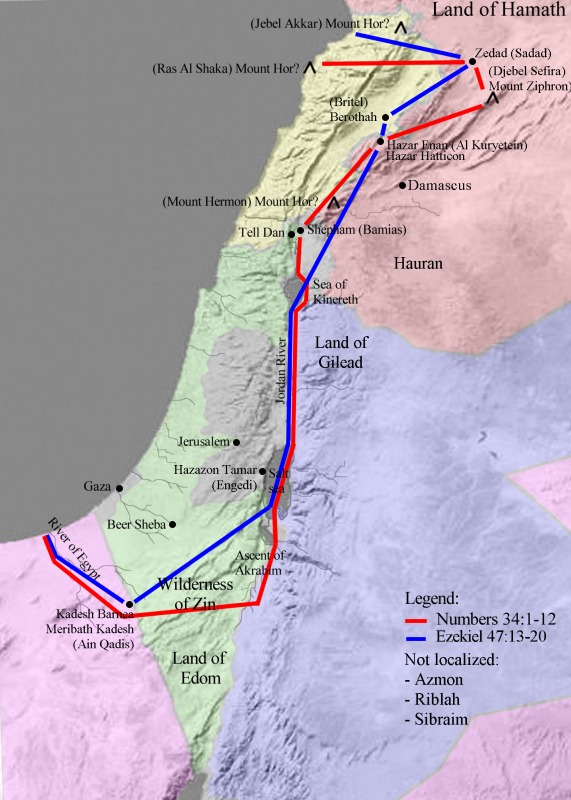 Note: Interpretations of the borders of the Promised Land, based on scriptural verses

A slightly more detailed definition is given in (Exodus 23:31 ESV), which describes the borders as “from the sea of reeds (Red Sea) to the Sea of the Philistines (Mediterranean sea) and from the desert to the Euphrates River”, though the Hebrew text of the Bible uses the name, “the River”, to refer to the Euphrates.

Only the “Red Sea” (Exodus 23:31 ESV)) and the Euphrates are mentioned to define the southern and eastern borders of the full land promised to the Israelites. The “Red Sea” corresponding to Hebrew Yam Suf was understood in ancient times to be the Erythraean Sea, as reflected in the Septuagint translation. Although the English name “Red Sea” is derived from this name (“Erythraean” derives from the Greek for red), the term denoted all the waters surrounding Arabia—including the Indian Ocean and the Persian Gulf, not merely the sea lying to the west of Arabia bearing this name in modern English. Thus the entire Arabian peninsula lies within the borders described. Modern maps depicting the region take a reticent view and often leave the southern and eastern borders vaguely defined. The borders of the land to be conquered given in Numbers have a precisely defined eastern border which included the Arabah and Jordan.

(Numbers 34:1–15 ESV) describes the land allocated to the Israelite tribes after the Exodus. The tribes of Reuben, Gad and half of Manasseh received land east of the Jordan as explained in (Numbers 34:14–15 ESV). (Numbers 34:1–13 ESV) provides a detailed description of the borders of the land to be conquered west of the Jordan for the remaining tribes. The region is called “the Land of Canaan” (Eretz Kna’an) in (Numbers 34:2 ESV) and the borders are known in Jewish tradition as the “borders for those coming out of Egypt”. These borders are again mentioned in (Deuteronomy 1:6–8 ESV), (Deuteronomy 11:24 ESV) and (Joshua 1:4 ESV).

According to the Hebrew Bible, Canaan was the son of Ham who with his descendents had seized the land from the descendents of Shem according to the Book of Jubilees. Jewish tradition thus refers to the region as Canaan during the period between the Flood and the Israelite settlement. Eliezer Schweid sees Canaan as a geographical name, and Israel the spiritual name of the land. He writes: The uniqueness of the Land of Israel is thus “geo-theological” and not merely climatic. This is the land which faces the entrance of the spiritual world, that sphere of existence that lies beyond the physical world known to us through our senses. This is the key to the land’s unique status with regard to prophecy and prayer, and also with regard to the commandments.6)The Land of Israel: National Home Or Land of Destiny, By Eliezer Schweid, Translated by Deborah Greniman, Published 1985 Fairleigh Dickinson Univ Press, ISBN 0-8386-3234-3, p.56. Thus, the renaming of this landmarks a change in religious status, the origin of the Holy Land concept. (Numbers 34:1–13 ESV) uses the term Canaan strictly for the land west of the Jordan, but Land of Israel is used in Jewish tradition to denote the entire land of the Israelites. The English expression “Promised Land” can denote either the land promised to Abraham in Genesis or the land of Canaan, although the latter meaning is more common.

The border with Egypt is given as the Nachal Mitzrayim (Brook of Egypt) in Numbers, as well as in Deuteronomy and Ezekiel. Jewish tradition (as expressed in the commentaries of Rashi and Yehuda Halevi, as well as the Aramaic Targums) understand this as referring to the Nile; more precisely the Pelusian branch of the Nile Delta according to Halevi—a view supported by Egyptian and Assyrian texts. Saadia Gaon identified it as the “Wadi of El-Arish”, referring to the biblical Sukkot near Faiyum. Kaftor Vaferech placed it in the same region, which approximates the location of the former Pelusian branch of the Nile. 19th century Bible commentaries understood the identification as a reference to the Wadi of the coastal locality called El-Arish. Easton’s, however, notes a local tradition that the course of the river had changed and there was once a branch of the Nile where today there is a wadi. Biblical minimalists have suggested that the Besor is intended.

(Deuteronomy 19:8 ESV) indicates a certain fluidity of the borders of the promised land when it refers to the possibility that God would “enlarge your borders.” This expansion of territory means that Israel would receive “all the land he promised to give to your fathers”, which implies that the settlement actually fell short of what was promised. According to Jacob Milgrom, Deuteronomy refers to a more utopian map of the promised land, whose eastern border is the wilderness rather than the Jordan.7)Jacob Milgrom, Numbers (JPS Torah Commentary; Philadelphia: JPS, 1990), 502.

Paul R. Williamson notes that a “close examination of the relevant promissory texts” supports a “wider interpretation of the promised land” in which it is not “restricted absolutely to one geographical locale.” He argues that “the map of the promised land was never seen permanently fixed, but was subject to at least some degree of expansion and redefinition.”8)Paul R. Williamson, “Promise and Fulfilment: The Territorial Inheritance”, in Philip Johnston and Peter Walker (eds.), The Land of Promise: Biblical, Theological and Contemporary Perspectives (Leicester: Apollos, 2000), 20–21.

(Ezekiel 47:13–20 ESV) provides a definition of borders of land in which the twelve tribes of Israel will live during the final redemption, at the end of days. The borders of the land described by the text in Ezekiel include the northern border of modern Lebanon, eastwards (the way of Hethlon) to Zedad and Hazar-enan in modern Syria; south by southwest to the area of Busra on the Syrian border (area of Hauran in Ezekiel); follows the Jordan River between the West Bank and the land of Gilead to Tamar (Ein Gedi) on the western shore of the Dead Sea; From Tamar to Meribah Kadesh (Kadesh Barnea), then along the Brook of Egypt (see debate below) to the Mediterranean Sea. The territory defined by these borders is divided into twelve strips, one for each of the twelve tribes.

Hence, Numbers 34 and Ezekiel 47 define different but similar borders which include the whole of contemporary Lebanon, both the West Bank and the Gaza Strip and Israel, except for the South Negev and Eilat. Small parts of Syria are also included.

From Dan to Beersheba

The common biblical phrase used to refer to the territories actually settled by the Israelites (as opposed to military conquests) is “from Dan to Beersheba” (or its variant “from Beersheba to Dan”), which occurs many times in the Bible.

It is found in the biblical verses

The 12 tribes of Israel are divided in 1 Kings 11. In the chapter, King Solomon‘s sins lead to Israelites forfeiting 10 of the 12 tribes:

vs.30 and Ahijah took hold of the new cloak he was wearing and tore it into twelve pieces. vs.31 Then he said to Jeroboam, “Take ten pieces for yourself, for this is what the Lord, the God of Israel, says: ‘See, I am going to tear the kingdom out of Solomon’s hand and give you ten tribes. vs.32 But for the sake of my servant David and the city of Jerusalem, which I have chosen out of all the tribes of Israel, he will have one tribe. vs.33 I will do this because they have forsaken me and worshiped Ashtoreth the goddess of the Sidonians, Chemosh the god of the Moabites, and Molek the god of the Ammonites, and have not walked in obedience to me, nor done what is right in my eyes, nor kept my decrees and laws as David, Solomon’s father, did. vs.34 “‘But I will not take the whole kingdom out of Solomon’s hand; I have made him ruler all the days of his life for the sake of David my servant, whom I chose and who obeyed my commands and decrees. vs.35 I will take the kingdom from his son’s hands and give you ten tribes. vs.36 I will give one tribe to his son so that David my servant may always have a lamp before me in Jerusalem, the city where I chose to put my Name.