Leader Survives, but Wife Suffocates as Chinese Government Continues Assault on the Church 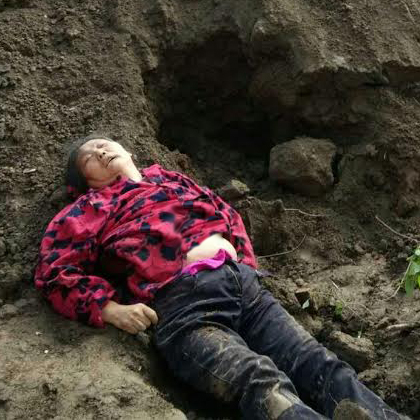 On April 14, a demolition team was instructed to begin the demolition of the Beitou Church in Zhumadian, Henan Province to pave the way for new developers to take ownership of the lucrative property. The church leader, Li Jiangong and wife Ding Cuimei, stood in front of the bulldozers in an attempt to stop the destruction of their church. As a result, both Li and his wife were buried beneath the dirt by the demolition team.

According to China Aid, a US-based human rights group, a member of the demolition team was heard saying to the other workers, “Bury them alive, I will be responsible for their lives.”

Ding Cuimei suffocated under the weight of the dirt released by the bulldozer while her husband was able to dig his way to the surface. The responsible individuals have been subsequently detained by local authorities due to pressure from the media.

The events which took place in Zhumandian, Henan Province are an example of an ongoing pattern within the Chinese government’s “Three rectifications, one demolition,” campaign. Over 2,000 church crosses have been forcibly removed across the country by the government in an attempt to reduce foreign influence upon the Chinese people.

While most cases involving church members standing between demolition crews and the church end peacefully, the death of Ding Cuimei has the potential to become a larger piece in an ever evolving mosaic between the government and the Christian community.

ICC’s president, Jeff King, stated, “The events which transcribed in the heart of China have deeply saddened ICC and its NGO partners who continue to work tirelessly to promote religious freedom for all. The death of Ding Cuimei has added to the storyline of how the Chinese government does not hold life to be precious. Rather than stopping, they decided to literally bulldoze human beings as they stood their ground to protect a house of worship. While it does not hold the same historical weight as Tiananmen Square, it serves as a reminder of Chinese citizens standing in front of mammoth machines to stop what is clearly an injustice. Our prayers go out to Li Jiangong for his loss and for the loss his congregation has experienced. We stand with China Aid and call on the Chinese government to bring those responsible to justice and to stop its oppressive pursuit of whitewashing Christianity from its shores.”