Three-hundred fifty thousand soldiers, 20,000 tanks, 2,450 warplanes and 460 military helicopters are massing in northern Saudi Arabia for a military exercise that is being called “Northern Thunder.” 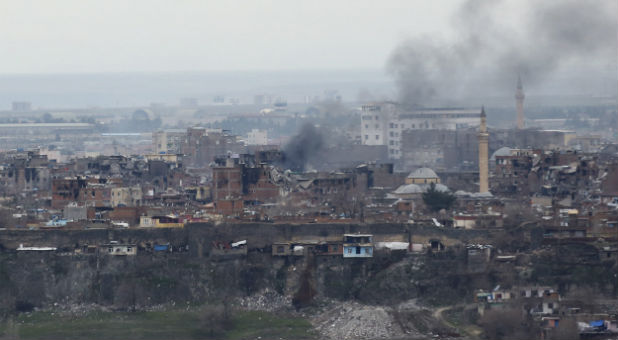 According to the official announcement, forces are being contributed by Saudi Arabia, the United Arab Emirates, Egypt, Jordan, Bahrain, Sudan, Kuwait, Morocco, Pakistan, Tunisia, Oman, Qatar, Malaysia and several other nations. This exercise will reportedly last for 18 days, and during that time the airspace over northern Saudi Arabia will be closed to air traffic. This will be the largest military exercise in the history of the region, and it comes amid rumors that Saudi Arabia and Turkey are preparing for a massive ground invasion of Syria.

If you were going to gather forces for an invasion, this is precisely how you would do it. Governments never come out and publicly admit that forces are moving into position for an invasion ahead of time, so “military exercises” are a common excuse that gets used for this sort of thing.

If these exercises are actually being used as an excuse to mass forces near the northern Saudi border, then we should expect an invasion to begin within the next couple of weeks. If it happens, we should expect to see the Saudi coalition storm through western Iraq and into Syria from the south, and it is likely that Turkey will come in from the north.

The goal would be to take out the Assad regime before Russia, Iran and Hezbollah could react. For the past couple of years, Saudi Arabia, Turkey and their allies have been funding the Sunni insurgency in Syria, and they were counting on those insurgents to be able to take down the Assad regime by themselves.

You see, the truth is that ISIS was never supposed to lose in Syria. Saudi Arabia and her allies have been funneling massive amounts of money to ISIS, and hundreds of millions of dollars of ISIS oil has been shipped into Turkey where it is sold to the rest of the world.

The major Sunni nations wanted ISIS and the other Sunni insurgent groups to take down Assad. In the aftermath, Saudi Arabia and her allies intended to transform Syria into a full-blown Sunni nation.

But then Russia, Iran and Hezbollah stepped forward to assist the Assad regime. Russian air support completely turned the tide of the war, and now the Sunni insurgents are on the brink of losing.

Aleppo was once the largest city in Syria, and Sunni insurgents have controlled it since 2012. But now relentless Russian airstrikes have made it possible for Syrian, Iranian and Hezbollah ground forces to surround the city, and it is about to fall back into the hands of the Syrian government.

If this happens, the war will essentially be over.

Saudi Arabia, Turkey and their allies have invested massive amounts of time, money and effort into overthrowing Assad, and they aren’t about to walk away now.

If the war was to end right at this moment, a weakened Assad regime would remain in power, and Iran and Hezbollah would be the dominant powers in the country for years to come. And once Assad died, it would be inevitable that Iran and Hezbollah would attempt to transform Syria into a full-blown Shiite nation. This is something that Saudi Arabia and Turkey want to avoid at all costs.

So they are actually considering what was once absolutely unthinkable – a massive ground invasion of Syria.

But if Saudi Arabia, Turkey and their allies go in, they run the risk of a full-blown war with Russia, Iran and Hezbollah. Just consider some of the comments that we have seen in recent days …

Reacting to a potential troop deployment, Syrian Foreign Minister Walid al-Muallem said Saturday, “Let no one think they can attack Syria or violate its sovereignty because I assure you any aggressor will return to their country in a wooden coffin.”

Pavel Krasheninnikov, a deputy of Russia’s State Duma, has warned Saudi Arabia that any military ground operation in Syria without Damascus’ consent would amount to a declaration of war, Press TV reported.

We could literally be looking at the spark that sets off Word War III. I can’t believe that Saudi Arabia and Turkey are actually considering this.

And if it does happen, you can rest assured that Barack Obama gave them the green light to go in.

Unfortunately, it sounds like the decision may have already been made. Just consider what Turkish Foreign Minister Mevlut Cavusoglu is saying …

“If we have such a strategy, then Turkey and Saudi Arabia may launch a ground operation,” he added, fueling concerns that a foreign troop invasion may soon further complicate the already turbulent situation in the war-torn country.

Earlier, Saudi Arabia, Bahrain and the UAE voiced their readiness to contribute troops for a ground operation in Syria on the condition that the US would lead the intervention. Damascus and its key regional ally, Iran, warned that such a foreign force would face strong resistance.

And in addition to all of the forces massing in northern Saudi Arabia, the London Independent is reporting that the Saudis have sent troops and aircraft to a military base in Turkey…

Saudi Arabia is sending troops and fighter jets to Turkey’s Incirlik military base ahead of a possible ground invasion of Syria.

The Turkish foreign minister, Mevlut Cavusoglu, confirmed the deployment in a statement to the Yeni Şafak newspaper on Saturday, days before a temporary ceasefire is due to come into force.

There are reports that Saudi officials are saying that the decision to send in ground troops is “irreversible”, and Reuters is reporting that the Syrian government claims that some Turkish troops have already entered the country …

The Syrian government says Turkish forces were believed to be among 100 gunmen it said entered Syria on Saturday accompanied by 12 pick-up trucks mounted with heavy machine guns, in an ongoing supply operation to insurgents fighting Damascus.

“The operation of supplying ammunition and weapons is continuing via the Bab al-Salama crossing to the Syrian area of Azaz,” the Syrian foreign ministry said in a letter to the U.N. Security Council published by state news agency SANA.

Of course the Turkish government is not going to confirm that report, but what we do know is that Turkey is shelling Kurdish forces on the Syrian side of the border. The funny thing is that these Kurdish forces are actually being supported and supplied by the U.S. government.

So the Turks are not supposed to be doing this, but according to Reuters they have been doing it for two days in a row anyway …

Turkey on Saturday demanded the powerful Syrian Kurdish YPG militia withdraw from areas that it had captured in the northern Aleppo region in recent days from insurgents in Syria, including the Menagh air base. The shelling has targeted those areas.

The hostility between Turkey and the Kurds goes back a long, long way.The Syrian Kurds are not threatening Turkey in any way right now, but Turkey is using the instability in the region as an excuse to lob artillery shells at a hated enemy. It is an act of naked aggression that the Obama administration should be loudly denouncing.

In addition, it is being reported that Syrian government forces have also been getting shelled by the Turkish military …

Anatolia news agency reported that the Turkish military hit Syrian government forces on Saturday, adding that the shelling had been in response to fire inflicted on a Turkish military guard post in Turkey’s southern Hatay region.

Turkish artillery targeted Syrian forces again late on Saturday, according to a military source quoted by RIA Novosti. The attack targeted the town of Deir Jamal in the Aleppo Governorate.

Needless to say, the Russians are quite alarmed by all of this.

In fact, Russian Prime Minister Dmitry Medvedev is warning about what could happen if things spiral out of control …

In the wake of Saudi Arabia’s proposal to send in ground troops on Thursday, the Russian Prime Minister claimed the move could spark a new world war.

“A ground operation draws everyone taking part in it into a war,” he told the Handelsblatt newspaper.

“The Americans and our Arab partners must consider whether or not they want a permanent war.”

If Saudi Arabia, Turkey and their allies launch an invasion and make a mad dash to take out the Assad regime in Damascus, the Russians will inevitably respond.

And if tactical nuclear weapons are necessary to keep the invading forces out of Damascus, the Russians will not be shy about using them.

I don’t know if I have ever seen a scenario which was more likely to initiate Word War III than the one that we are watching unfold right now.

So what has the mainstream media been saying about all of this?

Incredibly, they have been almost entirely silent. When he went looking for news about these events, James Bailey could find almost nothing on either Fox News or CNN …

I just visited the home page for Foxnews.com and found not one single mention of the insane events now unfolding in the Middle East. I could not believe it, so I used my Find tool to search for Syria and Saudi Arabia. Not one mention!

Of course that could change at any moment, but nothing there when I checked. Their stories were all about the meaningless Presidential election, which has already been decided regardless of what we think about it, and other stories about entertainment, sports, Congressional political theater, etc.

So I went to CNN and found just about the same thing with one news story about the Syrian cease fire, but when I read it there was no mention of any of the big events that have developed this week. This is truly an amazing media blackout!

But Fox News does have space to run headlines like these…

»»: Lovelorn elephant takes out his rage on more than a dozen cars

If Saudi Arabia, Turkey and their allies are going to conduct an invasion of Syria, the most likely time for this to happen will be by the end of this month during these military exercises.

If we can get to March 1st and no invasion has happened yet, perhaps we can breathe a little sigh of relief.

But if it does happen, and the Russians and the Iranians decide to shoot back, it really could be the start of Word War III.

If you have not been paying attention up until now, you need to start, because this could literally change everything.