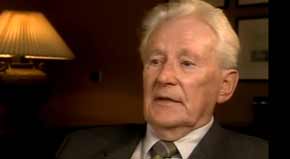 Oskar Groening, a 93-year-old former guard at the Auschwitz death camp, will go on trial in Germany in April on at least 300,000 counts of accessory to murder.

More than 425,000 people are estimated to have been deported to Auschwitz between May and July 1944, and at least 300,000 of them were murdered in the camp’s gas chambers.

Groening is known as the “bookkeeper” of Auschwitz. He counted the paper money collected from the luggage of camp prisoners and then passed the funds on to Nazi SS authorities, according to prosecutors. He also removed the luggage of previously delivered prisoners in order to hide the true nature of the camp from new arrivals.

Groening knew that the Jewish and other prisoners “were murdered directly after their arrival in the gas chambers of Auschwitz,” prosecutors said, ABC News reported.

Groening’s trial will take place in the northern German city of Lueneburg, with Holocaust survivors and survivors’ relatives as plaintiffs in the case.

Meanwhile, German authorities are also investigating 93-year-old Hilde Michnia (born Liesewicz) in Hamburg for allegedly serving as an SS guard at the Bergen Belsen death camp and for evacuating the camp prior to the arrival of Allied forces at the end of the war. The prisoners were forced to march, and at least 1,400 of them died along the way. Michnia denies these allegations and claims she only worked in the camp’s kitchens.