Over Views of Jesus and Gays. And the Battle Is About to Heat Up.

The Episcopal Church has announced that it will fight back against a recent ruling that granted a breakaway denomination in South Carolina the rights to names, symbols and $500 million in church property. The denomination will ask the Supreme Court of South Carolina to immediately hear the case after a judge ruled earlier this year in favor of the Diocese of South Carolina, a cohort of conservative churches that split from the parent denomination; about 30 houses of worship are remaining with the Episcopal Church in its fight to retain the property and symbols, according to the Associated Press. As The Blaze previously reported, the legal battle unfolded after the Diocese of South Carolina separated from the denomination over theological differences surrounding homosexuality and the “uniqueness of Jesus,” among other issues.

“We are grateful that Judge Goodstein’s decision protects South Carolina churches from being added to the long list of properties that [the Episcopal Church] seized then either abandoned or sold-off,” Jim Lewis, Canon to the Ordinary and a leader in the conservative breakaway group, said earlier this year in a statement praising the judge’s opinion.

Lewis added, “The decision protects our freedom to embrace the faith Anglicans have practiced for hundreds of years – and not the new theology being imposed on [the Episcopal Church’s] dwindling membership.”

Diocese of South Carolina Bishop Mark Lawrence said that the split was a long time coming.

“It’s all a question of church polity,” he explained. “We’ve been on a collision course with the Episcopal Church for 20 years for issues such as trustworthiness of the holy scriptures, the uniqueness of Jesus Christ, issues of anthropology — including what is a human being — questions of marriage and who receives the sacraments. All of those things are of theological concern to us.”

The latest appeal, which was filed by the Episcopal Church on Tuesday, shows that the battle over nearly $500 million in church property and control over names and symbols is nowhere near over.

In the notice of appeal filing, the Episcopal Church is looking to bypass the court of appeals, according to the Post and Courier.

If the state Supreme Court decides to hear the case, it likely won’t come before the justices until early 2016. Read more about the history of the legal battle here.

The Episcopal Church isn’t the only denomination to face a split over key theological issues, with Presbyterian Church (U.S.A.) — another group considered to have taken a more liberal approach to scripture — also battling with churches looking to disassociate. The Presbyterian denomination’s recent endorsement of same-sex marriage could lead additional churches to leave as well. 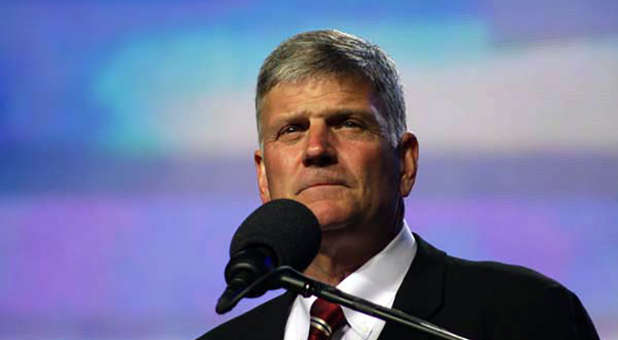 It wasn’t really surprising when the Presbyterian church USA moved to fully embrace same-sex marriage by changing the wording of its constitution earlier this week. But the fallout could be wider than first believed.

You can hear the gay rights drum beat, and it’s getting louder. Thankfully, Franklin Graham is beating a different drum.

“The Presbyterian Church (U.S.A.) approved redefining marriage in the church constitution Tuesday to include a ‘commitment between two people,’ becoming the largest Protestant group to formally recognize gay marriage and allow same-sex weddings in congregations,” Graham wrote on his Facebook page.

“In His Word, the Bible, God has already defined marriage, as well as sin, and we should obey that rather than looking for ways to redefine it according to the desires of our culture. Marriage is defined as between a man and a woman—end of discussion. Anything else is a sin against God, and He will judge all sin one day.”

Five Christian leaders in Laos were charged with medical malpractice after praying for a sick woman who later died. The Christians were ordered to serve nine months in prison and pay a fine for causing Mrs. Chansee’s death.

By Julie Oosterhouse Mrs. Kaithong, Mr. Puphet, Mr. Muk, Mr. Hasadee, and Mr. Tiang are all local church leaders in Savannakhet province. The five have been in jail since the woman’s death in June. On Feb. 2, they were found guilty of “treating [a person] without an official [medical] license, causing her to die,” sentenced to nine months in jail, and fined. The Christians did not have legal representation during the trial. The ordeal began after Mrs. Chansee, a new convert to Christianity, asked for prayer on June 19, 2014 after she became severely ill. The five leaders from surrounding villages came together and prayed for the woman’s healing for two days. After no improvement, they took her to a local hospital where she was given a blood test, IV fluids, and oxygen. In spite of this medical treatment, Mrs. Chansee died shortly after being sent home.

Police did not investigate the cause of death, and authorities blamed the Christians for her death. During the funeral service on Sunday, June 23, 2014, authorities arrived at the family home and tried to force the family to recant their Christian faith.

After an appeal was filed at the district level, the Christian leaders stayed at the home to await the outcome with the family. The next afternoon, village authorities arrived with military forces and arrested the five Christian leaders. A few hours later, the village authorities brought in Buddhist monks who performed a funeral service, and Mrs. Chansee’s body was taken and buried in the village cemetery, which is off-limits to Christians.

Mrs. Kaithong, Mr. Puphet, Mr. Muk, Mr. Hasadee, and Mr. Tiang were locked up at a sub-district prison where they were kept in handcuffs and their feet were fastened in wooden stocks. Court documents stated that the Christians had claimed “to heal every sick person without resorting to any medication at all,” ignoring the fact that the Christians had taken Mrs. Chansee to the hospital for treatment.

Though local authorities and an attorney appealed to district authorities, they were prevented from helping after the court case was moved to the provincial level.

While the five remain in prison, several human rights organizations are seeking to provide legal assistance.

Please pray that legal assistance would be made possible for these Christians. Ask God to comfort their families and congregations.

As if actively supporting a boycott, divestment and sanctions (BDS) campaign against Israel wasn’t enough, turns out the Presbyterian Church USA (PCUSA) considered banning the word “Israel” from its prayers.

In a report on the Algemeiner, a resolution was presented but ultimately rejected by the 221st General Assembly of the Presbyterian Church USA to “distinguish between the biblical terms that refer to the ancient land of Israel and the modern political State of Israel.”

To carry out such a plan, the resolution called for the development of “educational materials, with the help of our Presbyterian seminaries, for clergy, church musicians, worship leaders, and Christian educators regarding ‘ancient Israel/modern Israel’ distinction.”

The impetus behind the proposal to completely erase Israel from prayers was caused by “a section of hymns under the unfortunate heading: ‘God’s covenant with Israel.’”

According to the authors of the resolution, they were so disturbed by the song title, which they said “is open to interpretation,” that they felt that the next politically and religiously correct step was to completely remove the word “Israel” altogether.