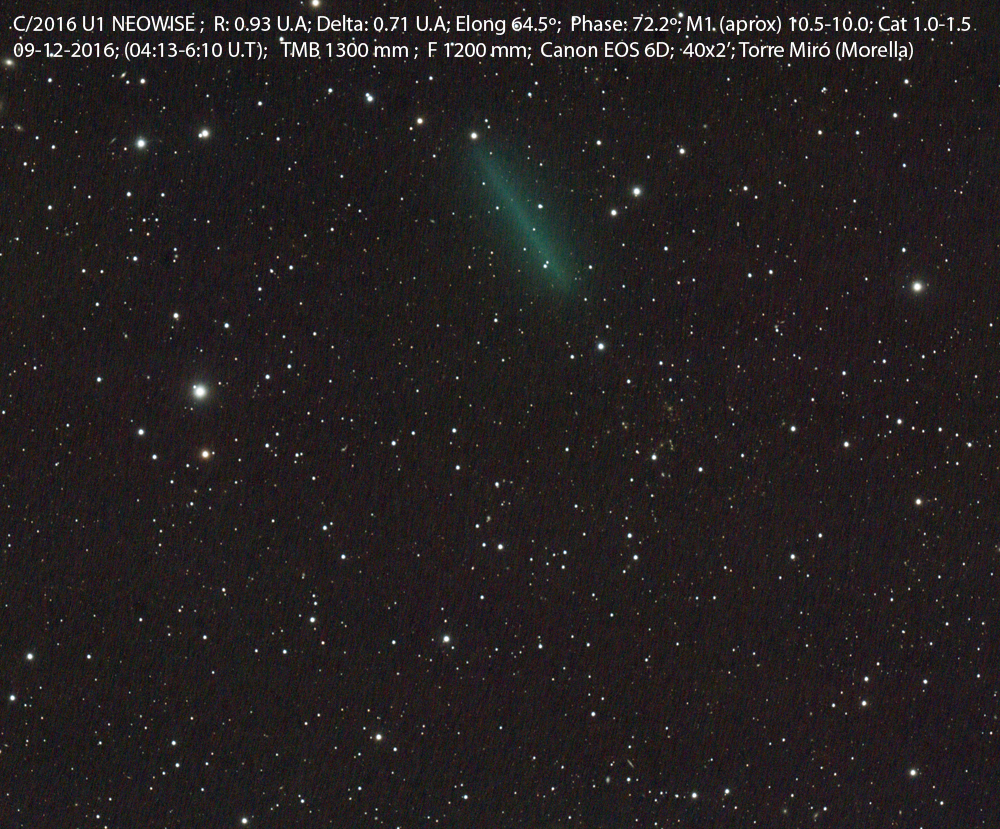 The NEOWISE project is the asteroid-hunting portion of the Wide-field Infrared Survey Explorer (WISE) mission. Funded by NASA’s Planetary Science Division, NEOWISE harvests measurements of asteroids and comets from the WISE images and provides a rich archive for searching WISE data for solar system objects.

WISE was launched in December 2009, and surveyed the full sky in four infrared wavelength bands (3.4, 4.6, 12 and 22 μm) until the frozen hydrogen cooling the telescope was depleted in September 2010. The survey continued as NEOWISE for an additional four months using the two shortest wavelength detectors. The spacecraft was placed into hibernation in February 2011, after completing its search of the inner solar system.

During its primary mission, NEOWISE delivered infrared detections of more than 158,000 minor planets to the scientific community, including more than 34,000 new discoveries. NEOWISE data have been used to set limits on the numbers, orbits, sizes, and probable compositions of asteroids throughout our solar system, and enabled the discovery of the first known Earth Trojan asteroid.

NEOWISE has been brought out of hibernation to learn more about the population of near-Earth objects and comets that could pose an impact hazard to the Earth. During its planned three-year survey in the 3.4 and 4.6 μm infrared bands, NEOWISE will rapidly characterize near-Earth objects (NEOs) and obtain accurate measurements of their diameters and albedos (how much light an object reflects). NEOWISE is equally sensitive to both light-colored asteroids and the optically dark objects that are difficult for ground-based observers to discover and characterize.

The characteristics of and initial performance of the NEOWISE Reactivation mission are described in Mainzer et al. 2014, ApJ, 792, 30.

The Single-exposure image and extracted source information from the first and second years of NEOWISE observations were released on March 26, 2015 and March 23, 2016, respectively. Diameters and albedos for asteroids detected by NEOWISE during the first two years have been published by Nugent et al. 2015 and Nugent et al. 2016.

As of mid-December 2016, NEOWISE has completed its sixth coverage of the entire sky since the start of the Reactivation mission. Over 562,000 infrared measurements have been made of 24,024 different solar system objects, including 613 NEOs and 110 comets.

The NEOWISE project is currently reprocessing all primary mission data to extend the search for asteroids and comets to fainter limits, and to take advantage of the improved photometric and astrometric calibrations available. We expect that this will result in delivery of many more detections of minor planets at infrared wavelengths.

The team is also chartered to search for evidence of cometary activity as well as to generate a final catalog of asteroid and comet physical properties for all known minor planets that can be identified in the NEOWISE data. This catalog will be delivered to NASA’s Planetary Data System.

Scientists do know is that 2016 WF9 is relatively large:

It is also rather dark, reflecting only a few percent of the light that falls on its surface. This body resembles a comet in its reflectivity and orbit, but appears to lack the characteristic dust and gas cloud that defines a comet.

“This object illustrates that the boundary between asteroids and comets is a blurry one; perhaps over time this object has lost the majority of the volatiles that linger on or just under its surface.”

Headline: 2017 is already enchanting for sky viewers for C/2016 U1 NEOWISE comet and more

Reported By: Not Stated

Headline: LOOK OUT NASA detects gigantic comet approaching Earth and it’s so huge you’ll be able to see it from Britain

Headline: HURRY! Rare comet C/2016 U1 NEOWISE will be visible from earth till 14 January

Headline: NASA says mysterious object hurtling towards Earth could be an asteroid or a comet

Headline: NASA detects TWO space rocks heading towards Earth – but it still can’t work out whether one is an asteroid or a comet

Reported By: Abigail Beall for Mailonline